You are here: Home » Stephanie Walker: An MBC Thriver’s Story

Life happens and a new normal unfolds.
As with most people, life sometimes gets in the way. Apparently, that is what happened to me in December 2014. So when I realized that I hadn’t gotten my yearly mammogram at my birthday time (December 23), it was already June 2015. I received a call from the breast center and the caller said I had an abnormal exam. Oops … wrong number. She called back and again asked my name and birthdate and repeated “abnormal mammogram.” I listened and decided to please her and make an appointment for a diagnostic mammogram on June 30. Well, both the ultrasound and
mammogram were abnormal on my right breast, so a biopsy was performed on July 7, 2015, which was nerve-wracking, so I cracked jokes and laughed which makes me more at ease and loosens up the staff, as well.

The waiting was tough.

I can’t have breast cancer, no family history, I did everything I was told to do, self-exams, mammograms, etc. Wow. I called my husband and my daughter. Still in shock, I completed my work week but I don’t remember much. After a few derailments, I decided to seek another oncologist and as luck would have it, he was on vacation so my appointment was for August 5, 2015. Things after that moved at a moderate pace with port placement, PET Scan, labs….and then found out I’m stage 4 breast cancer as I have bone metastasis.

You see I work for Notre Dame Hospice and I knew God is a part of my work every day. He allowed me to comfort, educate, laugh, and cry with the patients and families who have chosen to die with dignity. Hospice nursing isn’t for every nurse, dealing with people who have chosen not to seek aggressive treatments or who just have a terminal illness can be emotionally draining on a daily basis. Now that I was kinda like them……at several deaths, I would see me lying there…..tears continue with each one of them on my drive home….rarely in the presence of the families as this is their time to start to grieve and heal.

I worked my treatment schedule to coincide with my work schedule. I had to have radiation treatments for the pain in my right hip, which I thought was from old age, not cancer. So after all this was completed, I started chemotherapy in October. I knew all about chemotherapy (I thought) as many years ago, I worked in the Pediatric Intensive Care Unit and in a Pediatric Unit where I administered chemotherapy to children. The little ones were so resilient. Hair falling out, nausea and vomiting, mouth sores, and feeling tired and sleeping a lot. Yep, I got this. Well almost, ok no I didn’t.

I had an emotional time when my hair started to fall out so I had it cut short, then shaved it off. As my white blood cells took a nosedive, my oncologist put me on warning to watch out for sick people and crowds. Really? Sick people? I’m a nurse who goes into people’s homes, nursing homes, and assisted living facilities! By December, I couldn’t take calls anymore and felt a loss. If I just sit around I may die this is what I thought. So I asked my doctor and boss to allow me to see home patients every other weekend. I felt I could handle this. A baseball cap or a colorful bandana (I had tons of these) and off I went. 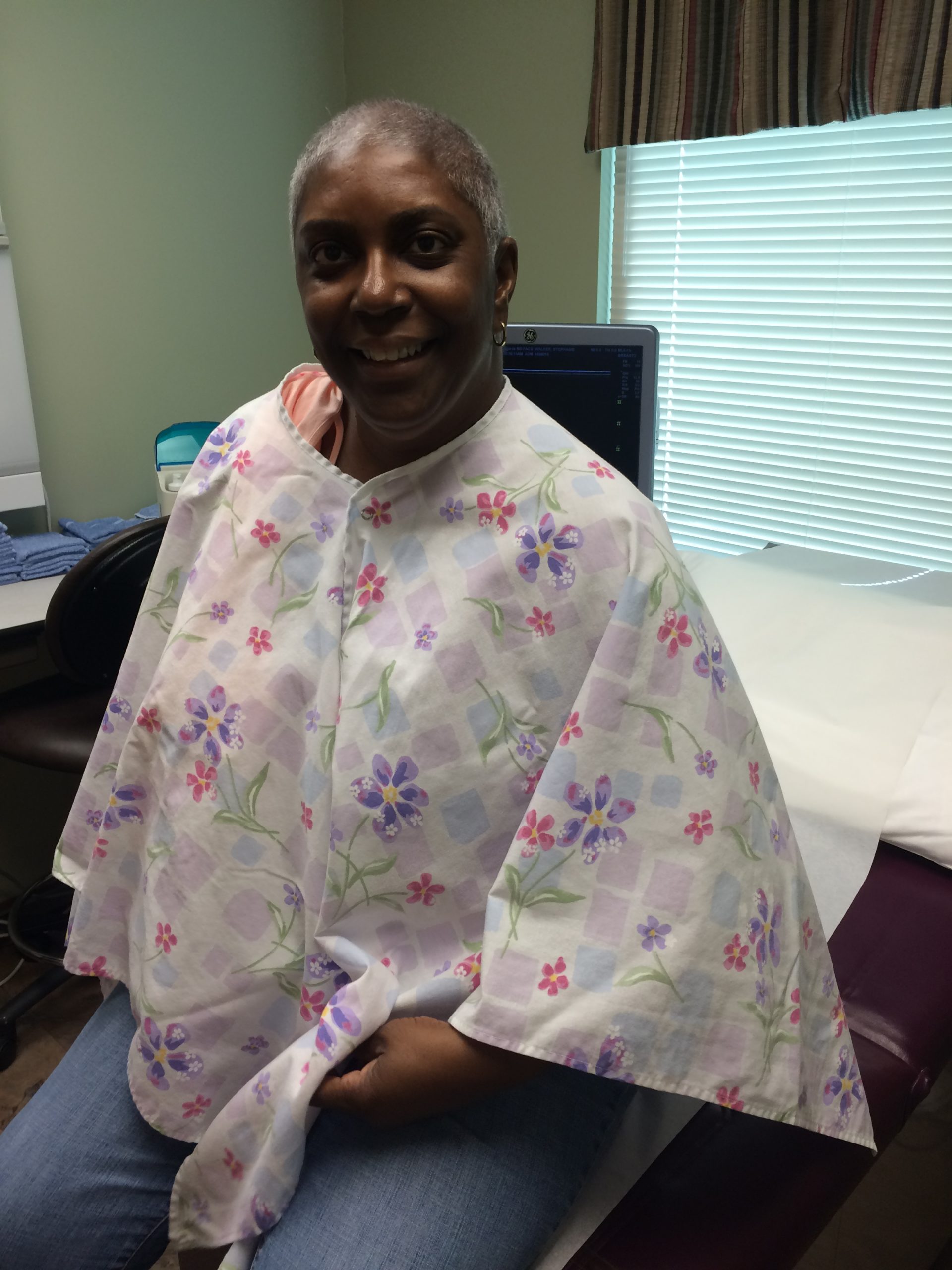 On several occasions, I was too tired to drive so my husband would drive me to my patient’s home and sit in the car and then drive to the next one. On a couple of occasions, I really felt sick while doing the visits and I would pretend my work cell was buzzing in my pocket, go outside, throw up, pop a peppermint in my mouth, and go back in with a smile on my face. Remember – it’s all about them now. I always made my patients feel that they are my one and only and I had time to spend with them.

During one visit with a young lady with the diagnosis of breast cancer with metastasis to her lung, liver, bones, and brain she asked why I always wore a ball cap. I told her I was having a bad hair day and we both laughed. She eventually was told about my situation by her primary nurse who was a good friend of mine. That patient told me one day that I would be ok and it was too late for her. She said she prays for me at night. This is why I love what I do.

During my entire active treatment plan, I worked except after I had my bilateral mastectomy in April 2016. Prior to this surgery, I had a bra-burning party and with wine and cheese, we took turns throwing one of my old bras into the fire. So releasing. I had to take 6 weeks off but actually went back to work after 5 weeks. My PET scan in March 2016 showed no cancer cells. “Cured/Remission” aren’t used today, it is “NED” (No Evidence of Disease). So I have had surgeries, radiation treatments, physical therapy and monthly injections which I will continue to take until 1) they stop working; 2) the cancer comes back; or 3) I die. Again the monthly injections are scheduled on my off week so I can feel crappy while off work.

Until another big change occurred in June 2017 resulting in moving to another state, new oncologist, new people and I hoped — a new job. Getting treatment at Duke has been great, a few other cancer-related hiccups have occurred such as a pulmonary embolus in the left lung and a mini-stroke (TIA) in 2018, leaving me unable to work. Not working was truly harder on me than the cancer diagnosis.

I have become very active in my community volunteering with hospice, the local cancer center, another hospital as a patient and family experience volunteer, and advocating for women of color with MBC. Positive attitude, God, supportive family and friends, and a medical team that I trust all play together in my life as a thriver of MBC.