You are here: Home » Vector Security is Helping ‘Secure the Cure’ for Local Survivors of Breast Cancer 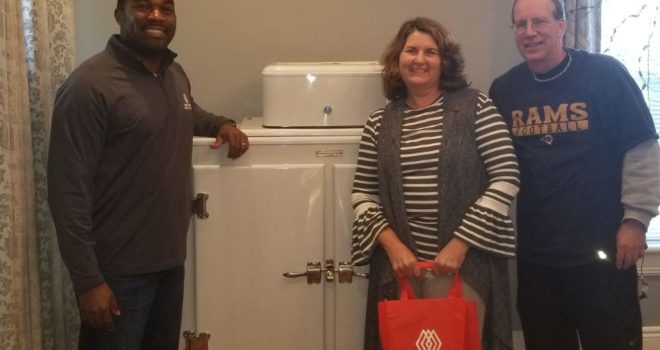 Raleigh Branch of Vector Security supports Susan G. Komen by donating $100 for each security system sold through “Securing the Cure’ campaign during 2018

“We are thrilled Vector Security has joined our local fight against breast cancer and is recognizing local survivors like Cathy through their Securing the Cure program,” said Pam Kohl, Executive Director of Komen NCTC. “Donations made through the program support community health grants across Central and Eastern North Carolina as well as contribute to Komen’s National Research Program, which provides funding for cutting-edge breast cancer research across the country.”

Vector Security, the provider of intelligent mobile security and automation solutions for homes and businesses, has partnered with Susan G. Komen North Carolina Triangle to the Coast (Komen NCTC) in support of the “Securing the Cure” program for breast cancer research and education. From video and doorbell cameras, to lights, locks, thermostats and voice control, Vector Security provides convenient security and home automation mobile solutions.

“Vector Security not only protects the communities we serve, we also give back and support important causes,” said Drew Jones, General Manager of the company’s Raleigh, NC branch. “We are proud to support Komen NCTC in their efforts to promote breast cancer awareness and honored to bring ease in home security to local breast cancer survivors.”

“We are thankful to have partners like Vector Security, who enable us to work toward achieving our Bold Goal of reducing breast cancer mortality by 50% in the U.S. by 2026,” added Kohl.

As part of the year-long partnership, Vector Security is also donating $100 to Komen NCTC for each security system sold and installed by the Raleigh Branch mentioning promo code “SGK” during 2018.

A dedicated webpage has been set up at www.vectorsecurity.com/SGK for more information. Those interested can also contact the Vector Security Raleigh Branch at 919-859-0163 and mention code “SGK.”

About Susan G. Komen® and Komen North Carolina Triangle to the Coast

Susan G. Komen is the world’s largest breast cancer organization, funding more breast cancer research than any other nonprofit while providing real-time help to those facing the disease. Komen has set a Bold Goal to reduce the current number of breast cancer deaths by 50 percent in the U.S. by 2026. Komen was founded in 1982 by Nancy G. Brinker, who promised her sister, Susan G. Komen, that she would end the disease that claimed Suzy’s life.

Komen North Carolina Triangle to the Coast (NCTC) is working to better the lives of those facing breast cancer in the local community. Through events like the Komen Triangle Race for the Cure® and Komen Wilmington Race for the Cure®, Komen NCTC has invested over $13 million in community breast health programs in its 29-county service area and has helped contribute to the more than $988 million invested globally in research. For more information, call (919) 493-2873 or visit komennctc.org.

For more than 40 years, Vector Security, Inc. (www.vectorsecurity.com) has been a premier provider of intelligent security solutions tailored to the needs of the customer. Headquartered in Pittsburgh, the company offers a full suite of electronic security services for residential, business and multi-site customers across North America and the Caribbean through a network of branches including Raleigh, NC and authorized dealers. Vector Security is also the official security partner of the Carolina Hurricanes®. Vector Security is a sister company of the Philadelphia Contributionship, a mutual insurance company founded in 1752, and currently provides cost-effective, technology-based security solutions to nearly 300,000 homes and businesses.