You are here: Home » Lindsey Gardner: The Face of a Team Leader

Lindsey Gardner: The Face of a Team Leader

Lindsey Gardner: The Face of a Team Leader

Lindsey Gardner will always remember the conversation she had with her mom who was in the hospital after her breast cancer metastasized to her intestines and liver.

“I was talking to her about starting a Susan G. Komen®Triangle Race for the Cure team and I told her I wanted her there, even if I had to push her in a wheel chair,” Lindsey recalls. “She looked at me and said, ‘No, Lindsey, I will walk!’ “ “There were people who I had never met who joined our team because they were touched by my mom’s story and wanted to make a difference,” says Lindsey, who grew up in Angier and now lives in Garner with her husband, Matt.  Lindsey’s mom Sharion Dugger died two weeks later on December 1, 2011. Lindsey’s team, called Sharion’s Angels in honor of her mom, had 69 members and raised $6,000 during the June 2012 Race. In 2013, the team grew to 87 people and raised $7,000.

Her mom had quite a story. Mrs. Dugger taught English for 36 years at Western Harnett High School, motivating many students to write and instilling in them a love of language and literature. She enjoyed antique shopping and finding bargains at thrift shops. She was known for sending hand-written greeting cards to friends and family for every occasion and always put others before herself.

Many of the Sharion’s Angels team members are family, teachers and former students who knew Sharion, as well as Lindsey’s friends from high school and East Carolina University, where she graduated in 2008 with a degree in marketing.

Lindsey was so moved by her experience as a Team Captain that she became a Team Coach in 2012 helping other teams with fundraising ideas and support. Today, she sits on the Susan G. Komen Triangle to the Coast 2014 Planning Committee and is co-chair of Teams. She does this in addition to her full-time job at Luxury Bath & Kitchens, a remodeling company in Raleigh.

“The most rewarding part of being a team captain is knowing that the funds we raise make a difference in people’s lives by paying for treatments or providing support to cope with this disease.  We do make an impact in our community,” Lindsey says. 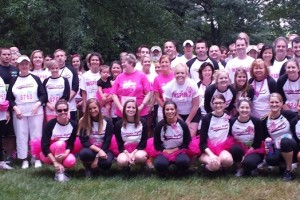 Lindsey’s team has found ways to get everyone involved, including the community, in raising money for this important cause – from a kitchen gadget party to a corn hole tournament. This involvement is how Sharion’s Angels has raised $13,000 in just two years.

“I can only hope my mom would be proud of our team and the money we’ve raised in her memory,” says Lindsey, who exemplifies what it takes to be a successful team leader.  “I’m passionate about breast cancer awareness and live for the day when another daughter won’t lose her mom to this disease.”