You are here: Home » Grace and Ease Team Profile 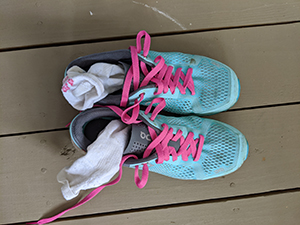 Inspiration story…
A year after my treatment was finished for stage 3 hormone receptor positive breast cancer, I decided I wanted to catalogue all the things that helped me through treatment. I wrote a blog post everyday for breast health awareness month. So many friends and friends of friends offered their help and experience via text and social that I wanted to find a way to pay it forward. I named my blog Grace and Ease (GraceEase.com). It was what I asked for during treatment and became my mantra.

Fast forward to this year. I saw your call to action on wral. Since the race was virtual it actually made it easier for me. And since I’m all about ease, I went for the virtual team. We relocated to Chapel Hill as I was diagnosed. It made so much sense to get friends from all over the country to participate. I could walk when I wanted to, have a team made up of friends who could walk when they wanted to and build my own event. It worked for me and the people that joined.

Fundraising success…
I’m a marketing professional so spending money is my role not raising it! I focused on sharing my story and using my marketing acumen to consistently message my network. I signed up late and only had a couple of weeks to build a team and raise funds. This may have helped me consolidate my efforts.

My number one goal was to get team members. In the midst of covid I craved more connection and loved the idea of a team event. My fundraising goal was initially $2000.

Tactically, I started with an email to friends and family. My headline was to build the team. Secondly, it was to raise the funds. I followed up with a post to my social networks alternating btw facebook and instagram. I shared photos from my treatment journey… After I shaved my head, me as Mr. Clean for Halloween and with my then three-year-old daughter at my last day of radiation.

Friends responded. I reached my $2000 goal and slowly built my team. Then, I challenged myself to make $4000. I included all of this in my social posts consistently posting. I reached the $4000! I was surprised and elated that I could inspire others to give to the cause to cure breast cancer.